A downloadable game for Windows

Invasion! Is a tower defence game where you must defend your base from  the evil goblins that have come to raid your house!

--Build and upgrade your defence--

Between each round you can build and upgrade defensive turrets that will shoot enemies and also block their path, use them to create long winding paths. Hovering over turrets with your mouse will also show you their range of attack.

The mortar tower can deal lots of damage to many enemies at once with splash damage! They are much more expensive and slower however and also won't be able to attack at a very close range so you must position them wisely.

You can upgrade turrets by using the upgrade tool, this will increase their power and speed!

As you build turrets they will become more expensive to build new ones so it is advised to balance upgrading towers and building new ones for the best defence.

Use the destroy tool to break down old turrets and gain some money back or spend some money to remove obstacles in your way.

-Enemies will appear out of only one of the red spawners to begin with but every 5 rounds a new one is opened up and you won't know until the wave has already started, so be prepared for attacks from multiple angles!

-Defeating enemies will earn you money but if you let any through you will lose a life!

-As the game progresses, enemies will become tougher to beat and come in greater amounts.

Every game is played on a randomly generated island which you can customize by changing the size, amount of land space and the amount of rocks and trees found on the island.

Share worlds that you play on with your friends by giving them the world seed.

Use the WASD keys to pan the camera around (SHIFT to speed up), the right mouse button to change camera angle and the scroll wheel to zoom in and out.

Use the sidebar to choose tools or turrets to use and click where you want to place them. Pressing R will rotate the item you are about to place and pressing C will cancel the current tool you are using.

Before the game starts you should choose a location for your base. Choose wisely as you must defend it at all costs! Enemies will try to enter the base from the front door so remember to rotate it the way you want by pressing R.

-Good luck and have fun!

To run the game just unzip the file and run "Invasion! tower defence.exe" 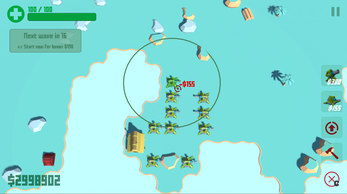 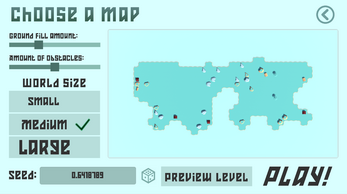 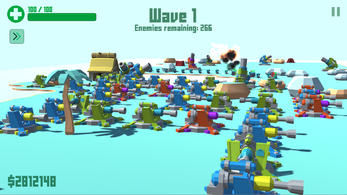 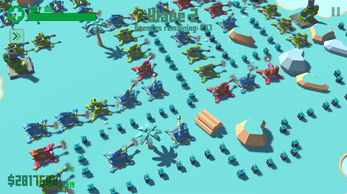